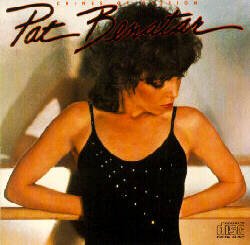 Pat:  The Sophomore Slump, also known as the Sophomore Jinx, refers to a multi- media phenomenon that occurs when the second effort of a sports player, director, student, or musician, fails to match the success of the first effort.
It happens to everyone, don’t expect too much the 2nd time, it’s not a big deal, and if you’re lucky you can try to regroup for the 3rd record. That’s all we heard…We were preparing for a disastrous 2nd record after the huge success of In The Heat Of The Night. They were setting us up and trying to prepare us for a massive fail. All they managed to do was freak us out and get in our heads in a negative and destructive way.
We switched producers, our beloved mentor, Peter Coleman was replaced by Keith Olsen, who had wild success with Fleetwood Mac, Foreigner etc.. Keith as a person was a good guy, but we were mismatched in the studio. I spent most days in the studio, lying on the couch with a cold cloth on my forehead nursing a migraine. It was very stressful for many reasons. We had lost our “rudder” Peter Coleman, we were not ready to be in charge or equal partners in the process. But we got ready! Neil jumped in, used everything that Peter had taught him and found a balance that worked with Keith’s style, which was as an unobtrusive, overseer. I’m sure this approach worked great with seasoned veterans, but for us, at this point in our musical journey, it was terrifying. Neil stepped up and Chris Minto, the engineer was right there along the way a safety net. As it turns out we didn’t need the net, Neil figured it out. It was the beginning of his evolution from guitar player/songwriter to the talented producer he is today.
The record was a smash, selling over 4 million (Quadruple Platinum) copies the US and 5x platinum in Canada. It stayed at #2 for 5 weeks (behind Double Fantasy) and remained on the charts for 93 weeks. We won the first of 4 Grammys for Best Rock Vocal Performance, Female. It contained the song Hit me with your Best Shot, our first top 10 hit and a gold single as well as Hell Is For Children, our beloved anthem about the horrors of child abuse, recognition and solidarity with the victims.
You Better Run, a Rascal’s cover became the 2nd video played on the new, cable network MTV, making Neil the first guitar player and me, the first female artist to perform on MTV.
The dreaded Sophomore Slump, thankfully never materialized. Crimes of Passion went on to be our most successful record and solidified our place in the music world.
Back to Discography
error: Content is protected !!