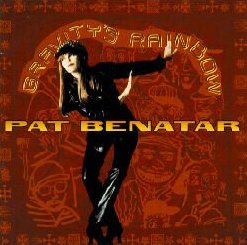 Thanks to George, a.k.a. LyricKing@AOL.com for these lyrics.

Pat Benatar makes an uncommon career move on GRAVITY’S RAINBOW: She successfully modernizes her sound. Of course, 90s modernizing simply means picking the right retro reference points, such as the Jimi Hendrix-style guitar intros to “You & I” and “Disconnected.” But there’s a little bit more to this album, namely the kind of enthusiasm for a maudlin lyric that has been the Hallmark of Benatar’s career. By the time the standard-issue power ballad “Every Time I Fall Back” rolls around, you’re trapped in her little world of romantic cliches, so you might as well enjoy it. The tricked-up musical settings, complete with modest rockabilly and folk touches, make it easy enough.
— Mike Lehecka, Request