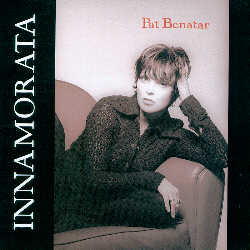 Thanks to Monica Wilén for typing the lyrics for us!

innamorata (inn · a · mor · á · ta) n.f. 1. lover; 2. beloved — It’s an acoustically driven record – there are electric guitars on it also – but it’s basically an acoustically driven record with different instrumentation. We have fiddles and cellos, it’s a little bit different than what we’re used to doing. The song content is a little different, primarily about relationships. I don’t know that it’s a huge change (in style); it’s certainly in a different musical direction, but you’ll know it’s us. It’s an expansion. When you start writing songs, they begin to take on a certain life. I kind of let them lead where they’re going to go and they led in that direction. When we were writing them they were written on acoustic guitars, so it kind of lended itself to that.
—Pat Benatar, Relentless Live Interview

A promo song not included in album:  Cry For Love

Pat:  “Innamorata” was all about songwriting. So many of our favorite songs are part of this collection. “River of Love”, Strawberry Wine”, At This Time”, “Dirty Little Secrets” and of course “Papa’s Roses” which was inspired by Katherine Dunn’s magical, mind-blowing novel, “Geek Love”.