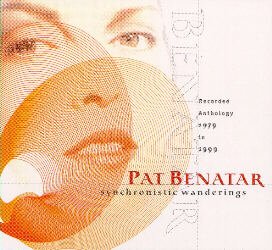 Synchronistic Wanderings – Behind the Music

EMI/Capitol Records Catalog division will release a three-CD Pat Benatar collection on May 18, tentatively titled Synchronistic Wanderings (Recorded Anthology 1979-1999). The new set covers the period from Benatar’s first hit, 1979’s “Heartbreaker,” up through her 1997 Innamorata album, and includes the Top 10 singles “Hit Me with your Best Shot,” “Love Is a Battlefield,” and “Invincible.” Benatar and husband/producer/guitarist Neil Geraldo [sic] were closely involved in compiling the project.

“We wanted to include all of her charting Billboard singles,” reissue coproducer David Tedds tells ICE, “all of the key album tracks and a liberal sprinkling of rarities… yes, for the collectors, but also to sort of push the boundaries of what people’s perceptions of her are.”

Following is a listing of the new set’s collector’s items, with explanations:

“I Need a Lover,” 1979 recorded at New York’s Bottom Line, and part of a radio broadcast. “This was recorded about two weeks after the live band got together,” Tedds says, “which is why Neil and Pat want to use this, because it’s very early on in their formation. Even though there are versions that technically sound better, where the band sounds tighter and slicker, this is real raw – which is what they wanted.”

“Love is a Battlefield,” previously unreleased demo version. “It’s very different,” Tedds says. “In the finished version, Pat does multiple vocals, whereas in this, there’s only her lead vocal line.”

“Here’s My Heart,” from Giorgio Moroder’s 1984 soundtrack to Metropolis.

“New Dream Islands,” an unreleased outtake from Seven the Hard Way. “this was apparently the first song they had written and demo’ed for Seven the Hard Way in 1985,” Tedds says. “It was a direction they considered taking the album in, but that direction got changed. It’s a very beautiful, ethereal song… exactly what you’d expect a song called ‘New Dream Islands’ to sound like.”

“Run Between the Raindrops,” recorded live in Philadelphia in 1988 and again, unreleased other than being part of a radio broadcast. “Neil was partial to this,” Tedds says; “He really likes Pat’s vocal. The song itself was written on the day their first child was born, and deals with that subject.”

“Sometimes the Good Guys Finish First,” from the 1987 soundtrack to The Secret of My Success.

“True Hearts,” an unreleased outtake from the Wide Awake in Dreamland sessions. “A great, uptempo song,” Tedds says, “one of those things you hear and say, ‘Why wasn’t it on the album?’ It just didn’t fit in with what they were doing with Dreamland.”

“Crying,” the Roy Orbison song, from 1978, previously unreleased. “A finished, fully-produced demo for the first album,” Tedds says. “You can really tell the difference between this and [material found on] the first album… you can tell why this was not included. Both songwriting-wise and production-wise, it just would not have fit with [uptempo rockers like] ‘Heartbreaker’.”

“Tell Me Why,” the traditional song from Disney’s 1991 For Our Children benefit album.

“Every Time I Fall Back,” a remix of the song found on Gravity’s Rainbow. “The Effect You Have on Me,” from an Edith Piaf tribute album.

“Rescue Me,” the Fontella Bass classic, from the Speed soundtrack.

We asked Tedds about Benatar’s early recordings before she hit it big with “Heartbreaker.” “As most of her fans know, her background was in cabaret,” he says. “She did a vinyl single in 1974 called ‘Day Gig’ on Trace Records, and she also did a vinyl 12-inch single in ’74 as part of a band called Coxon’s Army, featuring songs like ‘Can’t Help Lovin’ Dat Man.” Very cabaret-type stuff” So why aren’t any of these on the new anthology? “At the artist’s request,” Tedds says. “Pat and Neil just said, ‘No… they’re just so different.”