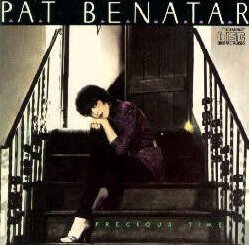 Pat:  Precious Time was a curious record for us. After the massive success of Crimes of Passion, #2 for 5 weeks, sales of 4 million in the US and 2.5 million in Canada and our first Grammy win….we were tired. As usual, contractually we were forced to go back into the studio every nine months. We were clearly, not ready. Songwriting proved to be difficult. Thankfully, Promises in the Dark, Precious Time and Fire & Ice were born, giving us our first and only #1 album in the US and our 2nd Grammy win.