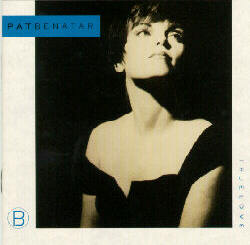 Thanks to George, a.k.a. LyricKing@AOL.com for the lyrics.

After seven albums’ worth of radio-friendly, album-oriented rock and a lengthy hiatus, Pat Benatar returns here with a straight-up blues album cut in the company of the purist Roomful of Blues. “True Love” is an unpretentious romp through a set of jump blues, and Benatar has enough of an aptitude for the form to know not to overdo it. She’s always sung sassily, but the way she wraps her voice around a song like Bloodshot Eyes — assisted by a solid shot of reverb — is a minor revelation.

Benatar and guitarist/producer/husband Neil Giraldo swing hard in the company of the five Roomful of Blues horns; her phrasing is spot-on throughout, and Giraldo does justice to his mentors. They rip through numbers by two Kings — B.B. (Payin’ The Cost to be the Boss and I’ve Got Papers on You) and Albert (I Get Evil). In the middle, they sprint through three originals, including a fast one led by a stride piano (I Feel Lucky) and the slow-burning title track, which comes within a few degrees of Peggy Lee’s Fever. “True Love” is a pleasurable comeback album for Pat Benatar, who may have hit us with her best shot when we least expected it.

When Pat Benatar and her husband and producer, Neil Geraldo, began writing rock songs for a new album, she reportedly became too bored to continue. Here, after all, is a 38-year-old mother who felt embarassed to slide into the leathers and belt out “Hit Me With Your Best Shot” and “Love is a Battlefield.”

So Benatar and hubby turned to their collection of vintage blues records and started recording their own versions. The result is a convincing stylization of blues and R&B tracks with Benatar, supported by the Rhode Island-based Roomful of Blues band and her own musicians, paying tribute to the likes of BB King (“Payin’ the Cost to be the Boss”) and Albert King (“I Get Evil”). There are also songs penned by the likes of T-Bone Walker (“Evening”), Big Maybelle (“So Long”) and Charles Brown (“Please Come Home for Christmas”).

Benatar’s vocal style is smooth and mature, her demeanor relaxed and comfortable-she never forces the situation or tries to copy someone else. Geraldo also prospers from the departure, laying down some hot guitar licks on “Payin’ the Cost to be the Boss” and co-writing a number of new songs. This marks a bold career move to be sure, but one that could pay off in spades if old fans and new listeners will just plug into the music without holding any preconceptions.

Pat:  True Love was a terrifying and fabulously satisfying departure for us. It was 1990 and we had hit a wall musically. We’d been recording and touring nonstop since 1979. I was burned out and in the bliss of motherhood. We had terminated our contract with our record company and had no intention of continuing down the path we had taken since we began.
A new record company president came on board and wanted us to return to the label. There was not a chance of that happening without some changes being made. Spyder had been trying to convince me to record a jump blues record. We were diehard fans, but the idea of US doing this kind of record was just madness! He promised it would be amazing, that I’d sing the shit out of that stuff and we’d have our friends, The Roomful of Blues and Chuckie Domanico play on it. I was terrified. I was thinking of retiring.  Becoming an outlier and disrupting everything that went before was not part of the plan. But as always, I loved his crazy ideas and trusted him. As usual, he was right. The new label head loved the idea.
It was an incredible experience, recorded the “old” way. No overdubs. We played all together in one room. We had a blast! It reignited our love of playing and opened the door to a whole new era of songwriting and performing for us.
The joy in that record can be heard on every track!
Back to Discography
error: Content is protected !!