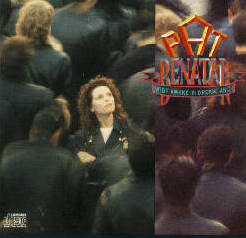 Thanks to George, a.k.a. LyricKing, for these lyrics.

Pat:  “Wide Awake In Dreamland” was released in 1988, our 8th record after the nightmare album, “Seven The Hard Way”. I think we had finally acclimated to being parents, Haley was 3 years old. We were settling in and figuring out how to make music and raise kids. I know I felt back to my creative self, I think Neil did too. It would begin the path of future recordings, blending family and professional life. It set the tone and way that we recorded and toured for 24 years, until our daughters graduated high school. In 2012, when our youngest, Hana, graduated we returned to our original schedule of recording and touring.